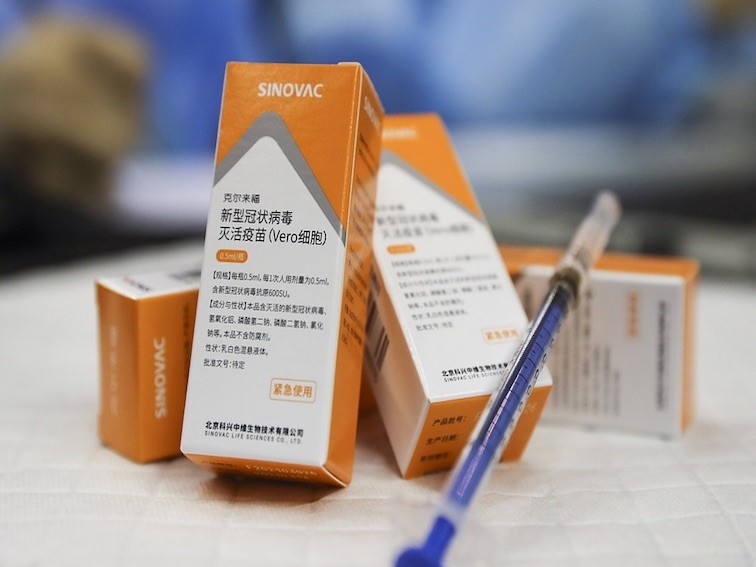 The World Health Organization (WHO) last week approved the Covid-19 vaccine produced by China's Sinovac for emergency use, which is a prerequisite to become a provider for the COVAX facility to supply developing countries with vaccines. “Today, I'm happy to announce that the Sinovac-CoronaVac vaccine has been given WHO Emergency Use Listing after being found to be safe, effective and quality assured following two doses of the inactivated vaccine,” WHO Director General Tedros Adhanom Ghebreyesus said at a press conference on June 1. “Furthermore, the easy storage requirements of CoronaVac make it very suitable for low-resource settings. It is now the eighth vaccine to receive Emergency Use Listing by the WHO. It's now crucial to get these lifesaving tools to the people that need them quickly,” Tedros noted. So far two Chinese vaccines have been approved by the WHO for emergency use. China has also approved emergency use of Sinovac’s vaccine for people aged 3 to 17. Sinovac completed a phase two clinical trial where participants were injected with a third booster dose after completing two regular shots. Participants' antibody levels showed a 10-fold increase compared with previous levels in a week, and a 20-fold increase in half a month.

Sinovac has already supplied 600 million doses to 46 countries and regions, including China. The company has distributed about 260 million doses to regions outside China while giving the domestic market about 340 million. More than 430 million doses of Sinovac's vaccine have been administered globally, including in China. That is, one in every five doses of the Covid-19 vaccine administered globally is from Sinovac, Spokesperson Liu Peicheng said. Sinovac has five production bases in China, with an annual capacity of 2 billion doses, and has issued local production authorization to more than five countries, including Brazil, Turkey, Indonesia, Malaysia, and Egypt.

On June 1, Chinese state-owned vaccine producer Sinopharm rolled out its first batch of Covid-19 doses for the global COVAX program in Beijing after the vaccine was approved by the WHO on May 7 for emergency use. Sinopharm has made some improvements on the special batch for COVAX, including packaging in English and a vaccine vial monitor (VVM) sticker shows temperature variations. Sinopharm is the world's first producer that has attached VVM stickers on Covid-19 shots, Zhu Jingjin, Vice President of the China National Biotec Group (CNBG), a Sinopharm subsidiary responsible for vaccine research and production, said at a ceremony to mark the first supply of Chinese vaccines to COVAX. QR codes are on the outer packaging for international monitoring and supervision, and the company has improved the instruction leaflet. China has promised to provide the COVAX program with 10 million vaccine shots. China had supplied 300 million doses of Covid-19 vaccines overseas by mid-May, contributing to vaccine accessibility and affordability, especially in developing countries.

The recent Covid-19 infections in Guangzhou were caused by mutated virus strains first identified in India, which have a shorter incubation period and higher viral load and can spread faster. The average incubation period was around 5.9 days last year but this time it was only 3.2 days. Guangzhou is speeding up its citywide nucleic acid testing, as a total of 94 infections were reported during the latest resurgence as of June 5, including 80 confirmed cases and 14 asymptomatic infections. Since the launch of nucleic acid testing on May 26, about 16.09 million samples have been collected in Guangzhou, and 33 people have been found to be positive. To curb the spread of Covid-19, the city further tightened travel restrictions. Starting from June 7 at noon, passengers leaving Guangzhou are required to present negative nucleic acid test results that are less than 48 hours old.

Jiangsu Province has reported the world's first case of a human infected with H10N3 avian influenza. China's health authorities said it was an occasional poultry-to-human transmission, and the risk of a large-scale spread is extremely low. The patient is a 41-year-old man from Zhenjiang, a city in Jiangsu province. The man had a fever and other symptoms on April 23 and was admitted to a local medical institute for treatment on April 28. Genetic analysis of the virus showed that the H10N3 virus was of avian origin and did not have the ability to effectively infect humans. H10N3 is a subtype of the Influenza A virus, also known as the bird flu virus. H10N3 is normally lethal to wild birds and poultry, as it can spread through respiratory droplets among the animals.

This overview is based on reporting by the China Daily, Shanghai Daily and Global Times.