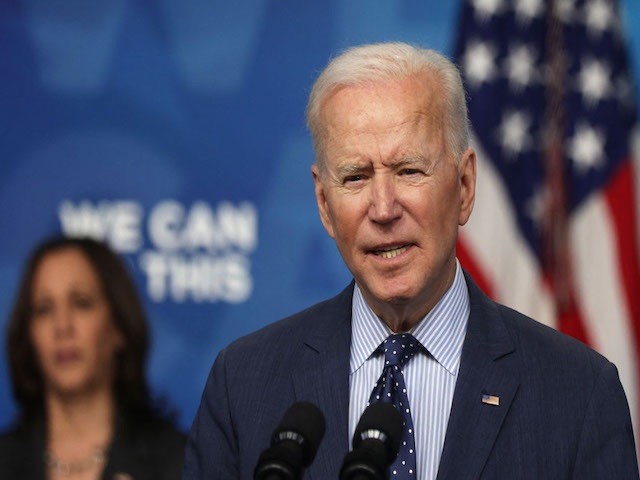 U.S. President Joe Biden signed an executive order adding 33 Chinese companies with supposed ties to China's military or surveillance industry, to a blacklist prohibiting U.S. companies and individuals from buying or selling publicly-traded securities from those companies. The list includes Huawei, China General Nuclear Power Corp and the country's three major telecommunications companies. The ban will take effect on August 2, and investors will have one year to divest. The Biden administration kept 26 out of the 44 companies that were originally sanctioned during the Trump administration, but added 33 new companies and entities, bringing the total number to 59. The move shows that Biden will not only maintain but also expand policies to restrict Chinese firms' growth made during his predecessor's tenure, while one of his current aims is to compete with China in the high tech sector. Some of the newly-added firms on the blacklist include subsidiaries or affiliates of large companies listed on the previous list. For example, some companies related to the Aviation Industry Corp of China and two finance-related companies of Huawei were added.

“It is the most sweeping executive order targeting Chinese tech entities since Biden took office, although there have been some sanctions previously,” Li Haidong, Professor at the Institute of International Relations of the China Foreign Affairs University, told the Global Times. It will cause bigger losses for U.S. firms and investors that have close cooperation with entities on the list, Li noted, but won't disrupt China's technological advancement on the global stage.

Besides Xiaomi, the Chinese smartphone vendor that won a lawsuit in a U.S. court against the Pentagon in May, two other Chinese firms – Luokung Technology Corp and Gowin Semiconductor Corp – were also absent from the amended list. Luokung, a Chinese mapping and cloud software technology provider, sued the U.S. government in early March. The NASDAQ-listed company received a temporary ruling from a U.S. court on May 5, suspending the ban. Gowin Semiconductor also initiated a lawsuit. More Chinese firms will be added to the investment ban, U.S. media reported, citing an anonymous U.S. official, and the list of firms will be updated on a rolling basis.

From the perspective of Chinese businesses, the impacts will be limited. He Weiwen, former Economic and Commercial Counselor at the Chinese Consulates General in San Francisco and New York, told the Global Times that the main limitation of the investment ban is that U.S. investors cannot directly invest in those Chinese firms. Meanwhile, the Chinese firms listed cannot publicly raise funds in the U.S. market. “Seen from public data, however, U.S. direct investment in China only accounts for 2% of China's foreign investment; that is, about USD2.6 billion, so the impact is little,” He said, as reported by the Global Times.

China expressed its opposition to the expansion of restrictions on investments in certain Chinese companies and vowed to take necessary measures to safeguard the legitimate rights of Chinese enterprises. The U.S. government has abused the concept of national security and state power and “unscrupulously suppressed and restricted Chinese companies”, Foreign Ministry Spokesman Wang Wenbin said. He added that the move not only undermined the lawful rights and interests of Chinese companies but also hurt the interests of global investors, including those in the U.S. The U.S. should respect the rule of law and the market, revoke these so-called lists that suppress China, and provide a fair, just and non-discriminatory business environment for Chinese companies, he said.

Meanwhile, contacts between the Chinese and U.S. governments continue. Chinese Vice Premier Liu He held a virtual meeting with U.S. Treasury Secretary Janet Yellen, which followed a phone call between Liu and U.S. Trade Representative Katherine Tai just six days earlier, on May 27. To pragmatically “solve specific problems for producers and consumers”, tariff rollbacks are essential, especially for U.S. producers and consumers, who have been much harder hit than their Chinese counterparts by the two countries’ tariff hikes, according to experts. Tu Xinquan, Dean of the China Institute for WTO Studies at the University of International Business and Economics in Beijing, said: “Through the increased tariffs on Chinese goods, the U.S. hoped to reduce the trade deficit with China, transfer costs to Chinese exporters, and force companies to move their supply chain activities out of China to the U.S. or other countries. “But such expectations have failed, while the tariff surges have damaged U.S. companies’ competence, dragged down U.S. economic development, and hurt the U.S. people due to consequently higher product prices and fewer jobs.” The U.S. trade deficit with China has increased, and U.S. companies are bearing the brunt of elevated tariffs on Chinese goods, Tu said, citing a recent report by rating agency Moody’s Investors Service, the China Daily reports.