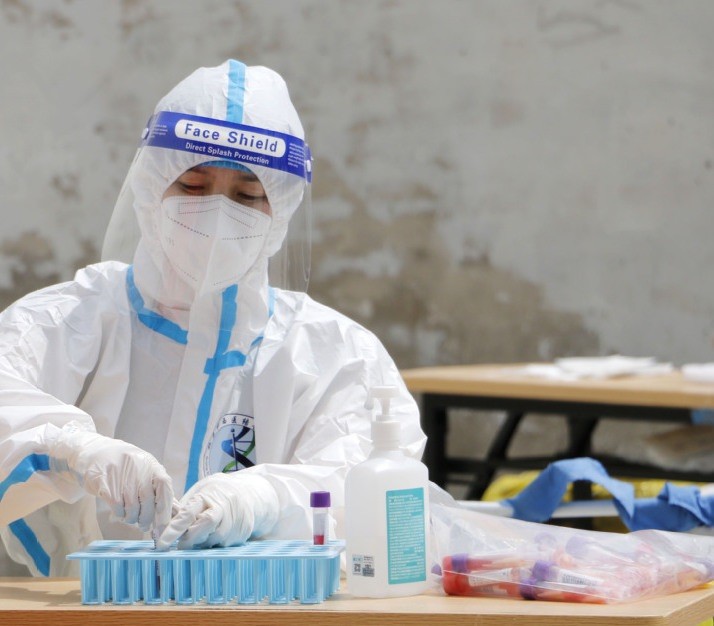 International passengers arriving in Beijing will only need to stay in quarantine for 10 days, down from the previous 21 days, in addition to one week of home quarantine. Those who entered through other Chinese cities are allowed to enter the capital after 14 days of quarantine in the entry cities.

Shanghai reimposed lockdowns in some areas after a one-day 50% surge in new symptomatic cases to 322. Including asymptomatic cases, the numbers dropped 0.7% to 3,947 according to data released on May 9. Wanli, the first subdistrict in Shanghai to achieve the societal zero-Covid goal, to embark on “static management” again to guard against a resurgence of the virus. Shanghai’s cumulative cases hit 608,000 since the outbreak began on March 1 while total fatalities reached 547.

The Covid-19 outbreak in Beijing has shown a first sign of ebbing, as on May 8 no new cases were reported from mass testing in the community. New cases were all found in quarantined areas. But on May 9, Beijing reported a new cluster of 21 infections in a data center of the Beijing Rural Commercial Bank in Shunyi district. By 4 pm on May 9, the district had identified 915 close contacts and 14 residential communities in Shunyi and the building of the data center were designated as precautionary zones. On May 9 Beijing had 21 high-risk and 35 medium-risk areas. The World Trade Center complex of hotels, commercial centers and shopping malls at the heart of the central business district in Chaoyang, is under lockdown after it was visited by a confirmed case. People entering public venues or using public transport across the city must show a negative PCR test taken within the previous seven days.

Beijing has doubled down on measures to cut off Covid-19 transmissions, with officials declaring the situation still “very challenging” despite the Chinese capital reporting fewer new cases. The city shut down more than 60 subway stations, about 15% of the total. Schools have postponed a return to classes on May 11. On May 9, 28 new infections were discovered, taking the total to 777 since the Omicron variant surfaced in the capital on April 22.

Authorities in Beijing asked residents in Chaoyang and Shunyi districts to work from home and not to leave the districts if not absolutely necessary and extended the suspension of restaurants' dining-in services. The number of Covid cases in the latest outbreak in Beijing has now reached 777, which is more than double the 335 infections in the capital's previous largest outbreak in the summer of 2021. Of the 777 infected people, only one developed serious symptoms – a 79-year-old who was not fully vaccinated.

Shanghai has been striving to achieve societal zero-Covid status in zones were no new cases had been detected for 14 days, but early last week new cases were reported in some of those zones, which would prevent the city from further relaxing the lockdown. The situation remains mixed, with the number of cases falling in some areas and rising again in others. Meanwhile more and more factories are resuming production under the closed loop system, where workers are sleeping on-site or nearby to avoid contact with outsiders. Some 63% of Shanghai’s total population are in precautionary areas without a positive case in the last two weeks. The number of residents in locked-down areas has fallen to 2.39 million in the middle of last week.

Strict measures have also been imposed in Zhengzhou, capital of Henan province, where the world's largest iPhone factory run by Taiwan’s Foxconn Technology Group is located. The city launched the measures after nine symptomatic and 24 asymptomatic cases were reported. Schools in the main city district will go online, while government and corporate staff will be working from home. Zhengzhou and Dalian (in Liaoning province) have also launched mass testing.

A meeting of the Standing Committee of the Political Bureau of the Communist Party of China, presided over by General Secretary Xi Jinping, said that China won the fight against Covid-19 in Wuhan, and it is certain to win the antivirus battle in Shanghai. It said that China would be sticking to the dynamic zero-Covid approach, adjusted according to specific conditions. The Standing Committee stressed that great uncertainties remain and it is not the right time to relax the efforts in battling the virus, adding that the country lacks adequate medical resources for the whole population, so relaxing response measures would definitely lead to large-scale infections, along with many severe cases and fatalities. The meeting also stated that: “we must struggle against speech and acts that distort, question or reject our country’s anti-epidemic guidelines and policy.”

If all of China’s first- and second-tier cities, with roughly 505 million residents, implement mass testing for a year, the cost could top CNY1.7 trillion, which would be about 1.5% of China’s 2021 GDP, or about 8.7% of last year’s public fiscal revenue, Tao Chuan, Chief Macro Analyst at Soochow Securities said. He warned that the additional cost will put further pressure on local authorities and municipal coffers, which are already being strained due to the implementation of tax cuts and increased infrastructure spending to boost China’s slowing economy. “A cost of more than CNY100 billion per month in test procurements is not a small expense,” he said. Economists continue to warn that the draconian measures are standing in the way of Beijing’s ambitious GDP growth target of “around 5.5%” for 2022. Fitch Ratings slashed its estimate for China’s 2022 economic growth from 4.8% to 4.3%, expecting that the country will adhere to its “dynamic zero” strategy until 2023. Analysts from Founder Securities also said that “testing has exploded under the dynamic zero-Covid policy”, especially this year. “Testing has become a daily necessity for people to go out,” they wrote in a note.

An Omicron-based vaccine candidate developed by China’s Sinopharm is expected to complete clinical trials in three to four months. China National Biotech Group, a subsidiary of Sinopharm, was granted permission to conduct human trials of its experimental vaccine against Omicron in Hong Kong on April 13 and received approval for trials on the mainland on April 26. Zhang Yuntao, Vice President of China National Biotech Group and its Chief Scientist, said that clinical trials will involve fully vaccinated people and those who have already received a booster shot. They will be given one or two doses of the new vaccine three to six months after the last shot. Although previous studies have shown that existing vaccines are still highly effective at preventing severe Omicron cases and related deaths, they are less capable of preventing infections.