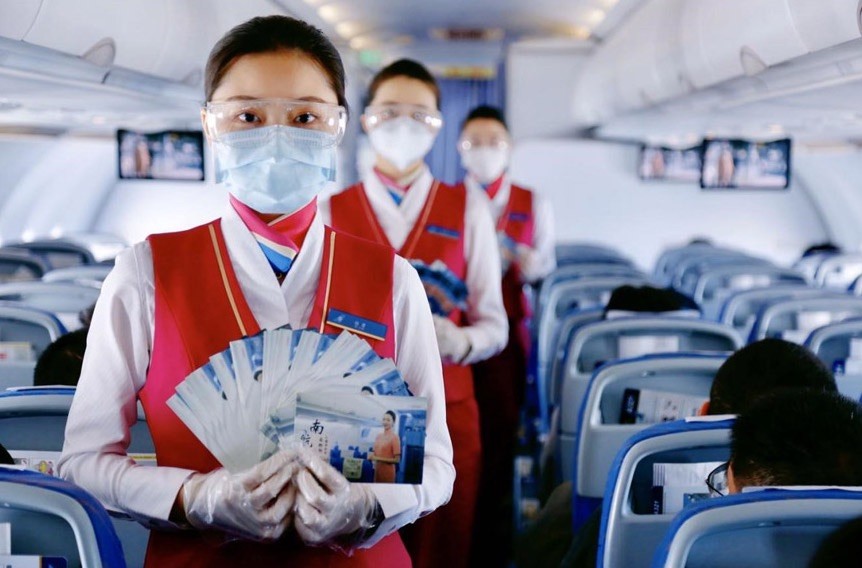 The number of new Covid-19 infections in China has dropped to single digits in a month. The latest Covid-19 resurgence started on October 17 and has so far reached more than 1,340 cases in total, of which most were in the country's North-east.

As cases have been reported in 21 provincial level areas, Beijing is implementing a stricter policy for inbound flights to the capital. The number of inbound flights from provincial-level regions with either middle- or high-risk Covid-19 areas will be cut as part of its latest pandemic prevention measures ahead of the Beijing 2022 Winter Olympics. Flights to Beijing from the capitals of such regions will be limited to one per day at less than 75% seating capacity, according to Ren Chaozhong, an official from the Civil Aviation Administration of China (CAAC). Flights to Beijing from cities that are designated as middle- or high-risk areas will also be temporarily suspended, Ren added. Provincial capital cities that include high-risk areas were Harbin, Shijiazhuang, Chengdu, Yinchuan and Zhengzhou. In addition to the reduction of flights, front-line inspections for entry into Beijing will also be stricter. All passengers entering or returning to Beijing will be required to produce a negative nucleic acid test conducted within 48 hours before boarding. Proof of a negative test will be checked at 33 airports, railway stations and bus stations in Beijing. For commuters living near Beijing, the test result is valid for 14 days.

Industry watchers said that the measures will drastically reduce the number of passengers entering Beijing, which will further cut domestic airlines' revenues. The daily average number of inbound and outbound flights at Beijing Capital International Airport and Daxing International Airport is now around 400 and less than 300 respectively, down from nearly 800 and 650 in October.

Following reports from the U.S. that deer have become infected with the Covid virus, Chinese epidemiologists have also become more concerned about the spread of the virus among animals. Yang Zhanqiu, Deputy Director of the Pathogen Biology Department at Wuhan University, told the Global Times that more evidence is needed to show the transmission chain of coronavirus among animals, and what specific species are likely to be infected. “The possibility of the virus spreading among animals so easily is alarming,” said Yang. Virologists pointed out that the most urgent task we are facing now is to find the source of Sars-CoV-2. Now the coronavirus is still ravaging the world, with the possibility of more mutations emerging, so the fastest solution to halt transmission is to find the origin of the virus, said Yang.

A Chinese research team has discovered a neutralizing antibody that is likely to be effective against most current and future Sars-CoV-2 variants, bringing more Covid-19 candidate therapies to the country, where six drugs have been domestically developed. The drug, named DXP-604 based on a neutralizing antibody, was developed by a research team led by Xie Xiaoliang, Director of the Beijing Advanced Innovation Center for Genomics at Peking University. It was used on some patients at the Beijing Ditan Hospital and proved able to significantly lower the viral load in patients' bodies and greatly relieve symptoms such as suffocation, and the loss of taste and smell, the Science and Technology Daily reported. The working theory of antibody-based drugs is to prevent a virus from binding with receptors in human cells, an immunology expert told the Global Times. So far, China has used three techniques in developing Covid-specific drugs – blocking virus entry into cells, inhibiting virus replication, and adjusting the human immune system. The three approaches have their respective advantages and strategies in dealing with the coronavirus.

Chinese scientists are also studying the efficacy and safety of mixing and matching Covid-19 booster shots and will issue details of an optimal combination in the near future, said Zheng Zhongwei, Director of the National Health Commission’s Development Center for Medical Science and Technology. China has yet to adopt a mix-and-match strategy, so people hoping to bolster their immunity after six months are given the same vaccine as their initial jabs.

The Chinese central government dispatched a delegation of epidemic prevention and control experts to the Hong Kong Special Administrative Region (HKSAR) for a four-day visit to study the feasibility to resume quarantine-free travel between the Chinese mainland and Hong Kong. The delegation inspected the epidemic prevention efforts at the Hong Kong International Airport. Quarantine-free travel is likely to resume in early December. Hong Kong still needs to make efforts to further prevent imported cases and boost vaccination rates before the resumption, experts noted. People have not been able to travel freely without quarantine between the mainland and Hong Kong since January 2020.

As of November 19, China had delivered more than 2.42 billion Covid-19 doses and fully vaccinated nearly 1.08 billion people, or 76.3% of its population. More than 65.7 million booster shots have also been administered.