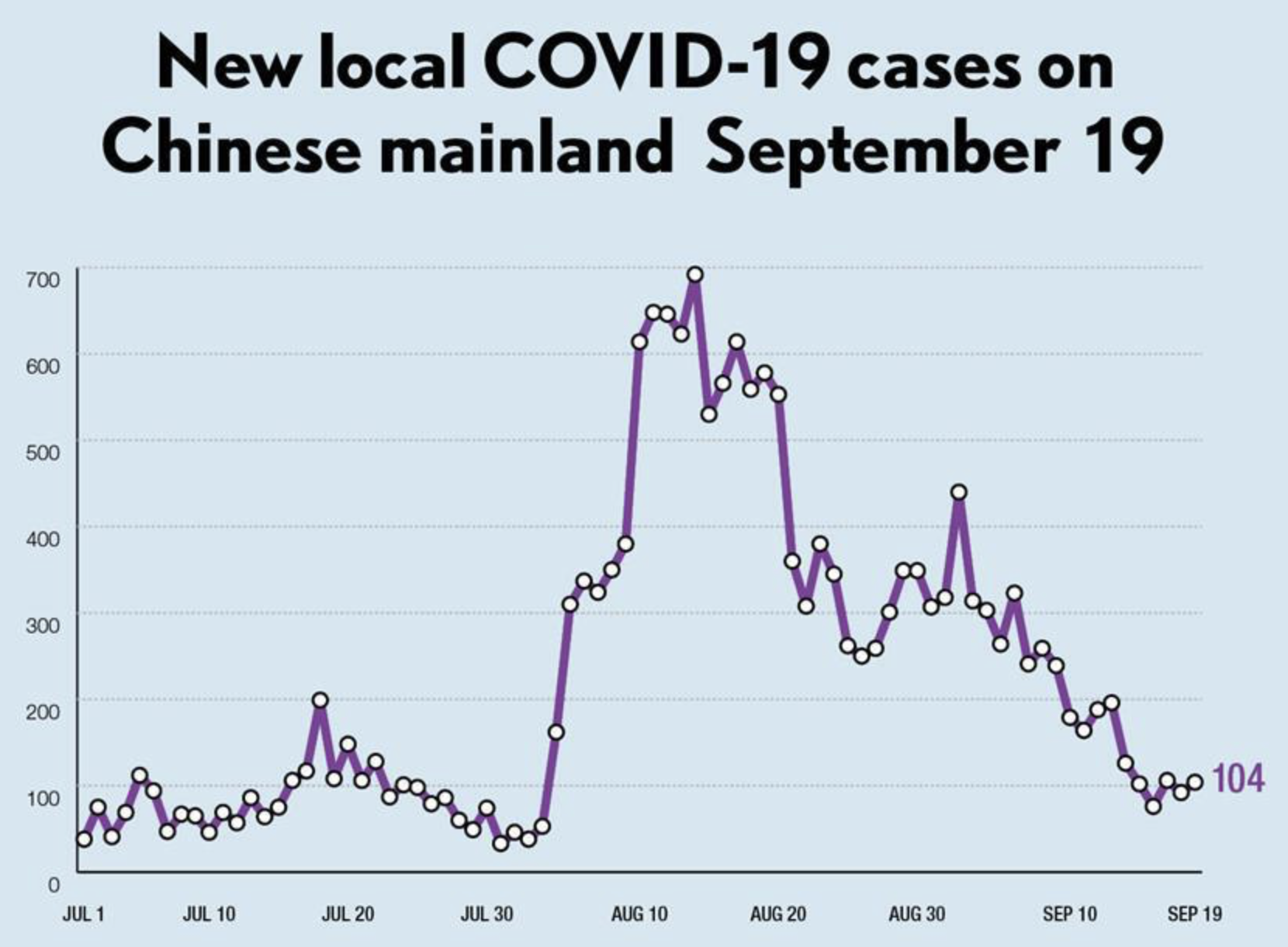 Although the number of daily new Covid-19 cases has dropped below 100, several cities remain locked down. China has also strengthened a series of anti-epidemic measures, including advising residents to stay put from September to late October, the National Health Commission (NHC) announced. Afterwards, the tightened measures will be adjusted based on the epidemic situation, authorities said. With the upcoming seven-day October 1 holiday, authorities are worried that increased travel would result in more flare-ups, such as recently occurred in Hainan, Tibet and in Chengdu, capital of Sichuan province. The recent flare-ups in universities in Beijing have been brought under control.

Residents are advised to avoid unnecessary trips and passengers must present a negative PCR test from the last 48 hours before boarding planes, trains, buses or other means of transportation. Cross-provincial passengers are suggested to take nucleic acid tests when arriving at their destinations. Also, a green health code and 72-hour negative PCR test are needed before checking into hotels or entering tourist attractions. Lu Hongzhou, Director of the Third People's Hospital of Shenzhen, said that the virus will keep evolving and mutating. The mutations are uncertain and need more timely monitoring to detect new variants. The long-term focus should be put on the nasal-spray vaccines and the research and development of anti-viral drugs, Lu said. Nasal-spray vaccines could help to bring the pandemic under control, according to the World Health Organization (WHO).

The number of new local Covid-19 cases announced daily exclude asymptomatic cases, but for example on September 18, 352 symptomless cases were reported in Guizhou in addition to 12 confirmed cases. The sudden surge in asymptomatic cases led to hundreds of them and their close contacts to be transferred to quarantine centers. A bus transporting 47 people crashed at 2:40 am on September 18 on a highway outside Guiyang, capital of Guizhou province, killing 27 and injuring 20.

Domestic tourism declined due to the unpredictable Covid-19 situation and restrictive policies that dented people’s enthusiasm for long-distance travel over the Mid-Autumn Festival holiday. Figures from the Ministry of Culture and Tourism show that the domestic market saw over 73.4 million trips over the three-day break, a decrease of 16.7% year-on-year. The number of trips was around 73% of that in the same period of 2019 before the outbreak of Covid-19. Revenue generated during the holiday was about CNY28.7 billion, falling by 22.8% year-on-year. The number was roughly 61% of that of 2019. Facing uncertainty with regard to travel restrictions in certain places across the country, many instead chose to take short trips closer to home.