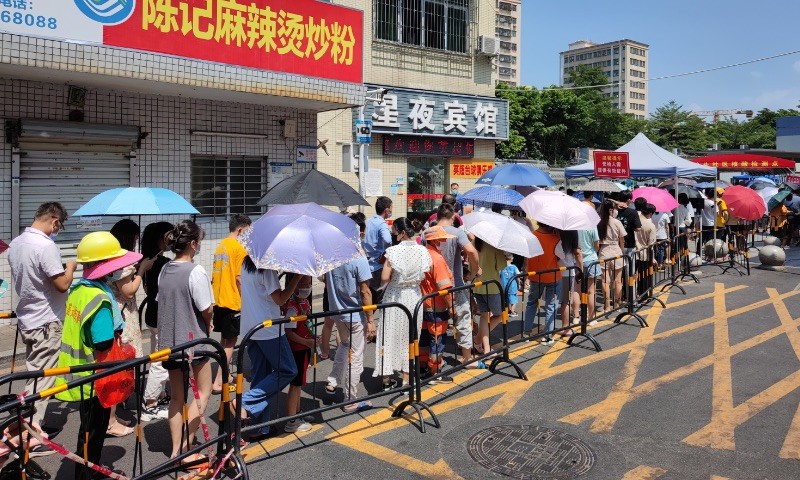 Number of Covid-19 cases dropping in the past week, but no relaxation of testing

In Shanghai, the number of new cases dropped to zero, but regular PCR testing is still continuing. In Beijing, people still need to be tested every two to three days to be allowed to enter restaurants and office buildings, and take public transport.

Wuhan, the epicenter of the early pandemic, put Jiangxia district under temporary lockdown for three days after four asymptomatic cases were detected in the district, home to 1.05 million people. Some of the district’s businesses and public transport have been shut down and access to all tourist sites has been suspended. During the lockdown, the district banned large group events and restaurant dining, closed public entertainment venues, produce markets and small clinics and suspended bus and subway services.

The possibility of a large-scale Covid-19 outbreak in Shenzhen, Guangdong province, has lessened. “All cases in the current Covid-19 resurgence in Shenzhen since July 15 have been detected at an early stage and the overall epidemic situation is well under control,” Health Commission Official Lin Hancheng said. The outbreak included sporadic distribution in residential communities, but the number of new cases in communities has decreased in recent days, Lin said. Indoor spaces, including swimming pools, KTVs and bars in the city’s key risk areas, have been closed and activities such as dancing in public squares suspended. Key enterprises including Huawei, Foxconn and automobile maker BYD continue operations within a completely closed-loop environment for seven days.

Health authorities in Guangdong province have rejected a proposal to give unvaccinated citizens a different health code and issued a rare warning against “excessive” Covid restrictions. The Guangdong health authorities said there was no national policy that supports an additional code and a blue code might cause inconvenience for some people because not everyone can get vaccinated.

Gao Fu, Director of China’s Center for Disease Control and Prevention (CDC), is stepping down from the post he held since 2017 and will be replaced by Shen Hongbing, former President of Nanjing Medical University. A Deputy Director of the National Health Commission (NHC) said the change in leadership could bring about closer adherence to President Xi Jinping’s directives. The leadership overhaul at the CDC comes as China continues to grapple with low vaccination rates among its elderly population, while implementing a zero-Covid strategy that included a stringent lockdown of Shanghai earlier this year.

Chinese vaccine firm CanSino Biologic’s inhalation-based vaccine shows a better antibody response as a booster against the BA.1 Omicron subvariant than Sinovac’s shot, but the antibody level dropped in months, clinical trial data showed. China has given about 56% of its 1.41 billion population a booster dose using domestic shots, and most people were boosted with the same vaccine as their two previous shots.

The National Medical Products Administration (NMPA) has granted conditional approval for a homegrown oral pill to be used to treat Covid-19. Azvudine, developed by the Genuine Biotech Co based in Henan province, was first conditionally approved to treat HIV-1 infected adult patients with high viral loads on July 20 last year, but will now also be used to treat adult Covid-19 patients with moderate symptoms. Chang Junbiao, Vice President of Zhengzhou University and a leading contributor to the development of the pill, said that clinical trials show that the drug is effective against all emerging variants, including Omicron. The price would be much lower than Pfizer’s Paxlovid pill, which costs about CNY2,300 per dose.

China recorded 32.3 million border crossing in the second quarter as authorities optimize Covid-19 measures, a quarter-on-quarter increase of 5.64% amid the growing demand of Chinese travelers to go abroad. Public security bureaus issued 214,000 regular passports, a rise of 41.8% compared with the first quarter and handled residence certificate applications for about 140,000 foreigners in China, showing a quarter-on-quarter increase of about 50%. Chinese Premier Li Keqiang promised to relax restrictions on international travel, including facilitating people-to-people exchanges.