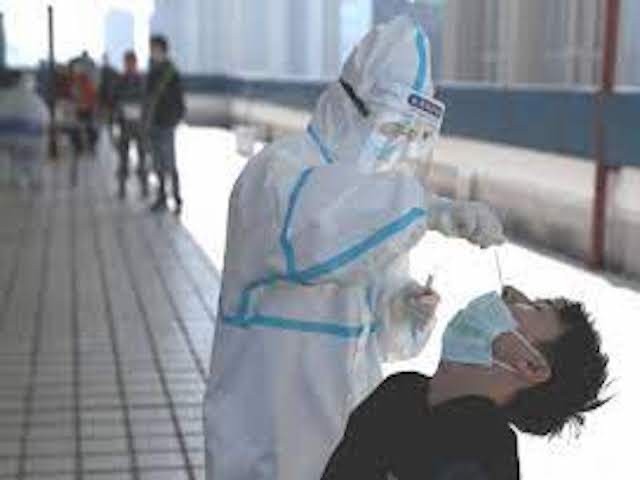 After the end of the seven-day National Day holiday, nucleic acid testing took place on a massive scale across China as some employers and school authorities required holiday goers receive testing before returning to work or school. People could receive a nucleic acid test by simply scanning a QR code and paying a fee of CNY60 to CNY80. Medical staff in Beijing said more people were coming to receive tests in the later days of the holiday but the waiting time was short – 15 minutes at most – and the testing was done in seconds. Xi'an in Shaanxi province requires every passenger who traveled to or from the city to have a negative test done within 48 hours. Guangzhou, which is hosting the Canton Fair this week, beefed up anti-epidemic measures by requiring people who enter or go out of the city to submit a negative test. But apart from these two cities, testing is not mandatory in most regions. To facilitate and encourage residents to receive tests, Shenzhen provided free tests in 85 testing venues to people who returned the city, while some testing centers in Shanghai offered 24-hour non-stop service. Deng Zhongping, Deputy General Manager of testing kit manufacturer Sansure Biotech in Changsha, Hunan province, told the Global Times that since the beginning of the year, the company has been working overtime to ensure supplies, which could be adjusted anytime based on market demand. China recorded 515 million domestic passenger trips in the past National Day holiday amid epidemic resurgences in Fujian province and Harbin city, which is 70.1% of the number of trips made during the same period before the Covid-19 epidemic.

Some local governments in China have begun offering Covid-19 booster shots to people over 18 who have already been vaccinated in order to improve immunity. The Guangxi Zhuang autonomous region said that booster shots will be made available across the region for adults who have been fully vaccinated for at least six months. Key groups will be prioritized during the initial stage, including people at higher risk of contracting the disease, such as workers in the cold chain, customs, transportation and health services sectors, as well as those who plan to travel abroad. In addition, essential workers in the public services sector, such as police officers, community workers, elderly care and sanitation staff, will also be given priority to receive an extra dose. It added that four types of vaccines will be used for booster shots: the two Sinopharm inactivated vaccines, one created by the group’s Beijing Institute of Biological Products and the other by its Wuhan Institute of Biological Products, one inactivated vaccine made by Sinovac Biotech, and an adenovirus vector vaccine from CanSino Biologics. People intending to get an additional shot will be given the same vaccine made by the same company. If supplies of a particular vaccine run short, other vaccines of the same type but from a different company can be used as an alternative. Guangxi has already fully vaccinated nearly 34.5 million people, or about 85% of residents above 12 years old.

Since mid-September, Tianjin and several cities in the provinces of Fujian, Hainan, Guangdong, Anhui, Hubei and Heilongjiang have announced the rolling out of booster shots for targeted groups. Sanya in Hainan province began offering booster shots last week. Wang Huaqing, Chief Expert at the Chinese Center for Disease Control and Prevention, said clinical trial results released by vaccine developers have shown a rapid rebound in the amount of neutralizing antibodies in humans following a booster shot.

Organizers of the 130th China Import and Export Fair and Guangdong provincial departments are sparing no efforts to ensure the fair to be held from October 15 to 19 in Guangzhou, will be safe. More than 7,500 companies will display their latest technologies and products in a more than 400,000-square-meter exhibition area, and an additional 26,000 firms will exhibit theirs online. To ensure a coronavirus-free event, all passengers arriving in Guangzhou from abroad will be quarantined for three weeks at designated venues. All domestic participants and visitors to the fair who come from or have visited a medium- or high-risk area within 14 days must show a negative Covid-19 test obtained no more than 48 hours before entering the exhibition halls, and they must report their health status and itinerary to local health departments, neighnorhood committees and hotels within 12 hours of their arrival. Free nucleic acid tests are available for people who have been granted certificates to enter the fair.

The potential of the SARS-CoV-2 virus to infect more animal hosts is not over, warned Gao Fu, Director of the Chinese Center for Disease Control and Prevention (China CDC), as he called for large-scale screening of global wildlife, especially the most susceptible species. Chinese virologists and epidemiologists emphasized the necessity of conducting origins-tracing work in multiple places across the world. Several types of mammals could be a reservoir for SARS-CoV-2 apart from humans, which could lead to spill back to humans, according to an article on the English-language website China CDC Weekly.