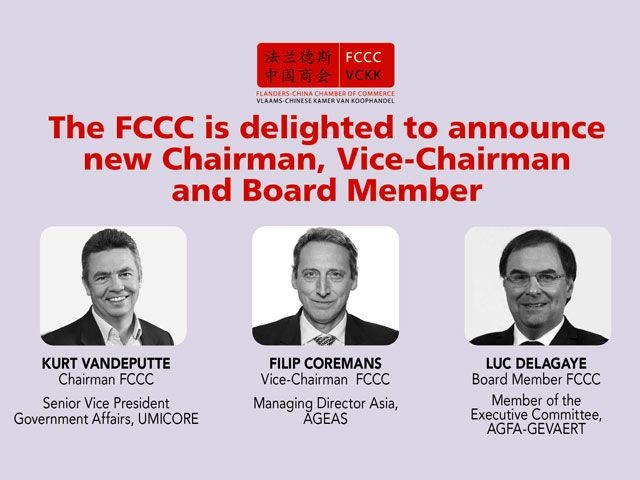 After serving as Chairman for six years, Stefaan Vanhooren has indicated he was not seeking another term as Chairman of the Board of the Flanders-China Chamber of Commerce (FCCC). As a founding member of the FCCC, Stefaan became a Board Member in 2005, was Vice-Chairman from 2010 to 2015, and thereafter Chairman. At the General Assembly on May 12, 2021, Kurt Vandeputte was appointed Chairman of the Board effective immediately. Kurt Vandeputte is Senior Vice-President Government Affairs at Umicore and has been leading the battery materials unit till July 2019. He has a long-term experience in China in commercial and leading positions at the local joint-venture.

Kurt Vandeputte said:''I intend to take on the chairmanship of the FCCC with a lot of commitment and enthusiasm. Thanks to the many years of efforts of Stefaan and his colleagues in the Board and the unrelenting commitment of Gwenn Sonck, the FCCC has become a healthy and valued organization.'' He added: ''I am looking forward to further strengthen networking and dialogue between our Flemish members and Chinese academic and business circles. I also would like to explicitly thank Stefaan Vanhooren for his long-term contribution to the FCCC.''

The Board of Directors wants to express its gratitude to Stefaan, Bart and Philippe for their enthusiastic commitment, efficiency and vision through the years, turning the FCCC into the respected voice of the many companies and organizations in Flanders-China trade relations.

About the Flanders-China Chamber of Commerce (FCCC)

The FCCC was founded in 2005 by a group of renowned Flemish investors, such as Ageas, Agfa, Ahlers, Barco, Bekaert, Deme, KBC Bank, Picanol and Umicore. This dynamic business platform aims to promote the economic, trade and scientific relations between Flanders and the People's Republic of China.

The Flanders-China Chamber assists Flemish companies doing business with China and supports Chinese companies which want to invest in Flanders.

The FCCC assists companies with:

Through publications and a weekly China Business newsletter, the FCCC informs companies on the current evolutions in economy and trade. The FCCC also keeps Chinese companies and organisations informed about the opportunities that Flanders can offer.

Thanks to its extensive network, the FCCC plays an important role in receiving Chinese delegations in Belgium. We introduce Flemish entrepreneurs to non-traditional investment areas and help them enter the Chinese market.

The FCCC regularly organises China conferences and round table discussions to exchange information, to intensify cooperation and to create network opportunities.

The FCCC leads the EU-China Business Association (EUCBA) in which all European China associations cooperate and therefore also plays an important role in Europe.

Around 250 companies are members of the FCCC.

The FCCC is the structural partner of Flanders Investment & Trade.