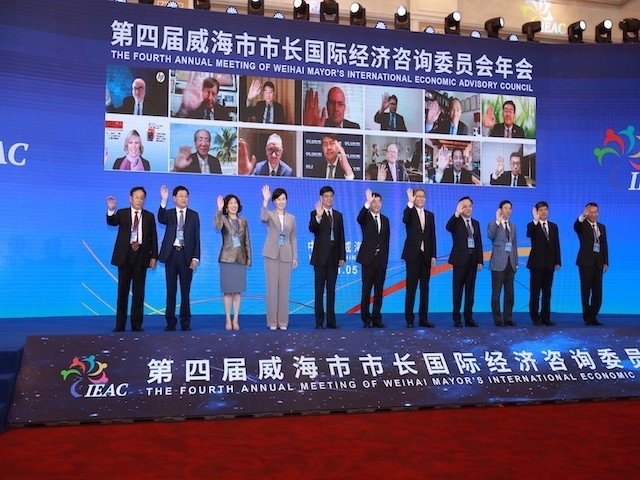 Ms Gwenn Sonck, Executive Director of the Flanders-China Chamber of Commerce and of the EU-China Business Association, who is a Member of the Weihai Mayor's International Economic Advisory Council and Honorary Citizen of Weihai City and Shandong Province, participated by video link in the fourth annual meeting of the Council. The theme of this year's meeting was “Integrate deeply into domestic and international circulations, achieve higher level of city internationalization”. Ms Sonck provided recommendations to the Council for Weihai's further internationalization by implementing China's dual circulation strategy. She mentioned that the goal of the strategy is to further develop Weihai's domestic market, while also attracting foreign investment. Weihai has an inviting business environment, well-developed industrial parks and people ready to grasp opportunities coming their way.

Weihai is located on the eastern tip of Shandong Peninsula, facing Korea and Japan across the sea. It has a land area of just about 5,800 sq. km and a coastline of nearly 1,000 km (and, incidentally, 185 islands). The population is 2.8 million.

Several of our member companies, such as Bekaert, Beaulieu and Marquardt already have major investments in Weihai. They have benefitted from the city’s very business-friendly investment environment. The city has established several pillar industries, including machinery, food, transportation equipment, textiles and garments, medicine and medical devices, electronics and new materials. The emerging industries of Weihai are medical & healthcare, information & outsourcing and “intelligent” manufacturing.

Over the past 10 years, the Flanders-China Chamber of Commerce and the Weihai Foreign Investment Bureau have formed a strong bond to help build and then strengthen trade relations between both sides and to introduce each other’s investment environments.

If you are interested to learn more about the investment advantages of Weihai and learn from other experiences, send an email to gwenn.sonck@flanders-china.be.