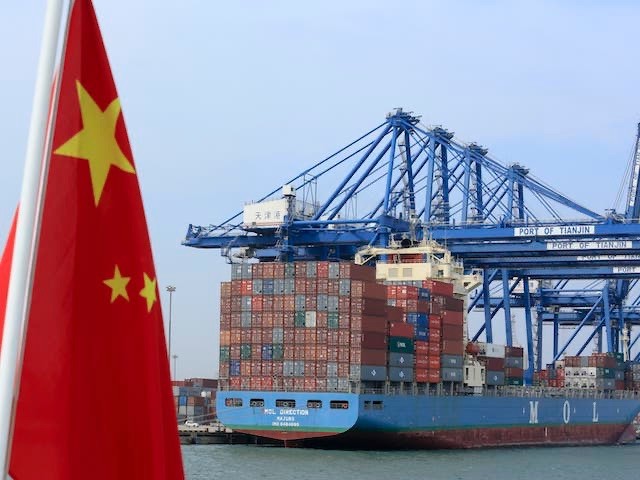 China's exports rose more than expected in September, despite the lingering fallout of the Covid-19 pandemic, power shortages and price hikes for bulk commodities. The unexpected acceleration showed the strong resilience of the country's export sector and the solid recovery of the economy; however, downward pressure and uncertainty remain for trade and economic growth in the rest of 2021, though a solid growth pace is still expected, experts noted. In September, China's exports grew 28.1% from the previous year, up 3.9 percentage points from August, data from the General Administration of Customs (GAC) showed. The growth exceeded a Reuters' forecast of 21%. However, imports growth slowed significantly to 17.6% from 33.1% growth in the previous month. Still, China's overall trade rose by a solid 23.3% during the month. Li Kuiwen, an official at the GAC, attributed the sustained growth of foreign trade to the recovery of the Chinese economy. “The long-term fundamentals of China's economy have not changed, and the steady domestic production and demand have provided strong support for the growth of foreign trade,” Li said.

In the first three quarters, foreign trade reached USD4.3 trillion, rising 32.8% year-on-year. Exports rose 33%, while imports increased 32.6%. The better-than-expected export data show that there is strong external demand for Chinese products, Cong Yi, Professor at the Tianjin University of Finance and Economics, told the Global Times. “It also shows that foreign countries depend on Chinese products, especially daily necessities, which have low prices and are internationally competitive, and cannot be replaced by those from other countries at the moment,” Cong said.

China's exports to the U.S. and EU grew by over 30% year-on-year, and those to Latin America jumped 58%. However, China's total trade grew by 15.2% in the third quarter in yuan terms, slowing from 25.2% in the second quarter and 29.7% in the first. “China's exports are entering a downward trend as a result of easing overseas demand and a slowdown in the substitution effect, but the sector still has resilience at large, and the export slowdown could be managed in a stable manner,” Wu Chaoming, Chief Economist at Chasing Securities, told the Global Times. The expected slowdown in trade growth also pushed some analysts to anticipate more downward pressure on China's economic growth. Wu estimated that GDP is likely to grow by about 5.6% in the third quarter, compared with 7.9% in the second quarter. Chinese economists said the slowdown is reasonable given the extraordinarily fast growth in the second half of last year. They added that the full-year GDP growth rate will still be very high, the Global Times reports.

Trade between China and Australia saw a sharp month-on-month decline in September as a result of deteriorating bilateral relations. In September, total bilateral trade reached USD21 billion, a decline of about 12.5% from around USD24 billion in August. The sharp fall in bilateral trade comes as China moved to curb costs caused by skyrocketing prices of iron ore, a major Australian export to China. In September, China's iron ore imports declined 12% year-on-year. China continues to cut steel production and reduce reliance on imported iron ore, especially from Australia.

The International Monetary Fund (IMF) has projected the world economy will grow by 5.9% this year, while China’s growth will moderate to 8%, both 0.1 of a percentage point lower than the IMF’s July estimates. “The downward revision for 2021 reflects a downgrade for advanced economies – in part due to supply disruptions – and for low-income developing countries, largely due to worsening pandemic dynamics,” the IMF said in its quarterly World Economic Outlook. The IMF said China’s prospects for 2021 were marked down slightly due to a stronger-than-anticipated scaling back of public investment. The country’s growth in 2022 is estimated at 5.6%, which is also 0.1 of a percentage point down from the IMF’s July forecast. The U.S. economy is forecast to grow by 6% this year.

The IMF predicted the global economy will grow by 4.9% next year, unchanged from the July forecast. Aggregate output for the advanced economies is expected to regain its pre-pandemic trend in 2022 and exceed it by 0.9% in 2024, while that for the emerging market and developing economies, excluding China, is expected to remain 5.5% below the pre-pandemic forecast in 2024, resulting in a larger setback to improvements in their living standards. While more than 60% of the population in advanced economies is fully vaccinated, and some are now receiving booster shots, about 96% of the population in low-income countries remain unvaccinated. The foremost policy priority is therefore to vaccinate at least 40% of the population in every country by the end of this year, and 70% by mid-2022, according to the IMF. China will strive to provide a total of 2 billion doses of vaccines to the world by the end of this year, President Xi Jinping said via video at the general debate of the 76th session of the United Nations General Assembly on September 21, the China Daily reports.