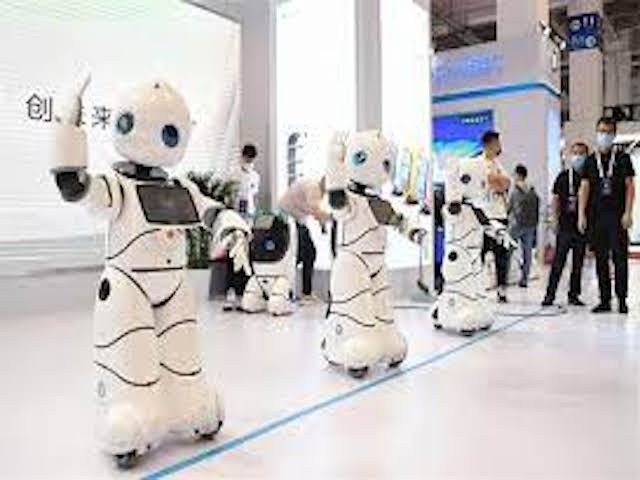 Robot technology was on show at the 2021 World Robot Conference, which opened in Beijing on September 9. During the event’s opening ceremony, the three Chinese astronauts onboard the Tiangong space station greeted participants with a video message, in which they pointed out the profound impact of robotics on humanity in many ways, such as industrial production and many aspects of daily life. The astronauts said the 10.2-meter-long robotic arm attached to the core module of the Chinese space station has helped them perform their spacewalks. The arm is the most advanced and complex mechanical appendage China has ever developed, and it can carry up to 25 metric tons of weight, according to the China Aerospace Science and Technology Corporation.

This year’s conference, the sixth since 2015, ran until September 13, and involved more than 300 scientists from China and abroad, as well as representatives from international organizations and companies. In a congratulatory letter to the first conference in 2015, President Xi Jinping said inventions in the field of automation have contributed to society since ancient times. Now, robotics has become a burgeoning sector represented by the smart manufacturing industry, and serves as a key testimony to modern science, technology and innovation, he said. China has made robotics and smart manufacturing the nation’s research priority, and it is willing to collaborate with international peers to make better robots to serve the people and the nation’s development, Xi added.

This year’s exhibition area featured three major sections on industrial robots, service robots and specialized robots. More than 500 products from around 110 companies were on display, ranging from cleaning drones to explosives inspection robots. Another key exhibition area focused on the latest technological achievements in robotic parts, as well as how the use of robots is revolutionizing fields such as medicine, life sciences and agriculture. The 2021 World Robot Contest Championship was also held during this year’s conference. Teams of engineers competed to design robotic appendages and medical rehabilitation robots, as well as create new programs to ensure improved human-machine interaction. This tournament is one of the biggest of its kind in China. Since its launch in 2015, more than 150,000 participants from more than 20 countries have taken part, the China Daily reports.

China has been the world’s largest market for industrial robots for years. In 2018, industrial robots made in China accounted for 38% of the global production volume, data from the Ministry of Industry and Information Technology (MIIT) showed. Over 237,000 industrial robots were produced in China in 2020, up 19% year-on-year. The latest data from the National Bureau of Statistics (NBS) showed over 205,000 industrial robots were produced during the first seven months of this year, up nearly 65% year-on-year. Xu Guoqiang, Sales Director for the North China market at lightweight robot expert firm Rokae (Beijing) Technology Co based in Beijing, said the rapid growth of China’s industrial robots was mainly driven by the swift adoption of robots due to mounting uncertainties brought by the coronavirus outbreak, and by China’s steady industrial development and growth. “We expect to see an explosive growth of industrial robots in China, especially in emerging fields like semiconductors and new energy. We’ll also see rising new opportunities in service-providing robots in applications in fields like new retail, catering and healthcare.”

Xu’s views were echoed by Yang Shuai, Executive President of Hunan Cothink Robotics Tech Co, which is based in Changsha, Hunan province. Yang said he expects to see substantial growth in service-providing robots in the future. “This trend will accelerate during the post-pandemic era,” he said.