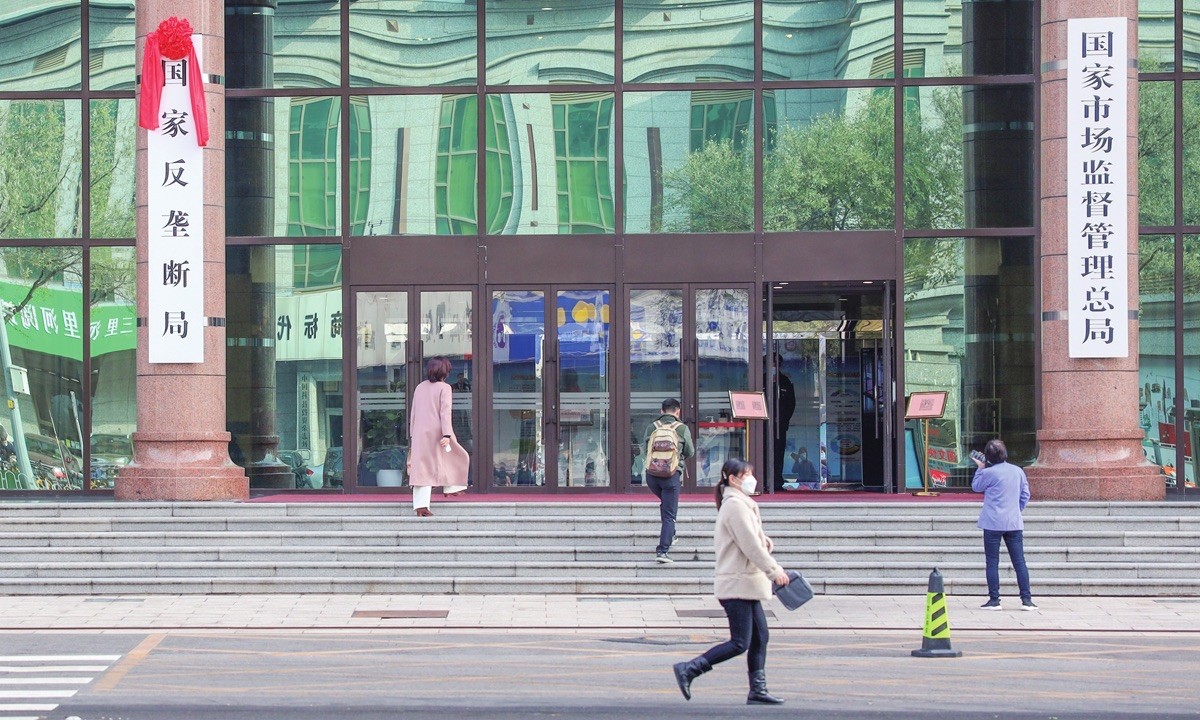 The newly established National Anti-Monopoly Bureau has inaugurated its office in downtown Beijing, as China is intensifying efforts to rein in monopolistic practices to maintain free competition in the market. The State Administration of Market Regulation (SAMR) under which the National Anti-Monopoly Bureau resorts, also released a guidance document for Chinese enterprises on anti-monopoly compliance. The establishment of the Bureau is expected to improve the business environment for the more than 150 million market players in China, and open up broader space for private enterprises to develop, analysts said. In the past three years, China has investigated and handled 345 cases of monopoly, 37,000 cases of unfair competition, and concluded over 2,000 cases of concentration of business operations. The guidance explained the overseas anti-monopoly compliance system, the focus of overseas anti-monopoly compliance risks, and antitrust risk management. Analysts said that the guidance could be a gift to companies, especially in the private sector. With more Chinese companies going global, understanding of international antitrust practices is a crucial area of due diligence. The guidance also explained monopoly agreements, the definition of abuse of dominant market position, specific content of concentration, methods of antitrust investigation overseas, rights of enterprises in overseas antitrust investigations, and foreign antitrust lawsuits.

The move is a preparation for the integration of China's antitrust practice with international standards. Transnational anti-monopoly efforts could be one of the areas of cooperation between China and the U.S., and potentially Europe too, said analysts. Many Chinese digital companies are globally competitive. As their business operations cover overseas users, they will come under the supervision of overseas antitrust regulators, Wang Peng, Assistant Professor at the Gaoling School of Artificial Intelligence at the Renmin University of China, told the Global Times. Companies may face severe penalties from the host country if they are not familiar with antitrust regulations and laws. The new guidance is applicable to Chinese enterprises operating abroad and those engaged in business operations in China that may have an impact on overseas markets. The affected business scope covers import and export trade, overseas investment, mergers and acquisitions (M&As), transfer or licensing of intellectual property rights (IPRs), bidding and tendering, and other business activities overseas.

The issuing of the guidance document is linked to China applying to join the Digital Economy Partnership Agreement (DEPA) and the Comprehensive and Progressive Agreement for Trans-Pacific Partnership (CPTPP), Hu Qimu, Chief Research Fellow at the Sinosteel Economic Research Institute, said. “It is expected that there may be a multilateral anti-monopoly mechanism in the future, which is an inevitable result of the development of the global digital economy, and also conducive to regulating the development of the digital economy,” Hu noted. China has signed 55 anti-monopoly cooperation documents with 33 countries and regions, and jointly handled dozens of major monopoly cases, according to official statistics. It is difficult for a single country to supervise the global operations of internet companies, said analysts.

According to the guidance, some jurisdictions define different degrees of criminal responsibility for anti-monopolistic actions. Individuals involved in monopolistic behavior, such as senior managers and those directly responsible, potentially face fines or even imprisonment, with penalties of up to USD100 million for corporate offenders and criminal fines of up to USD1 million for individuals and a maximum prison term of 10 years. If illegal gains or the victim's economic loss exceed USD100 million, the company can be fined up to twice that amount. The most recent example was Google, which lost a challenge against EU antitrust rulings and was handed a USD2.8 billion fine, the Global Times reports.

Including the latest ones, the total number of cases concerning illegal concentration in the internet platform sector has come to 87. Deng Zhisong, Senior Partner at Beijing-based law firm Dentons, told the Global Times that the recent cases mainly involve internet platforms and the variable interest entity (VIE) structure.